Recently I wanted to plot the pixel values of two images against each other. I though it would be good to combine extracting the pixel values (using RIOS) and plotting the data (using matplotlib) in a single script.

The script I wrote (two_band_scatter_plot.py) is available to download from the RSGIS Scripts repository

There are three main steps:

The 2D histogram was based on code from http://oceanpython.org/2013/02/25/2d-histogram/. As there are a lot of points, displaying as a 2D histogram makes the information easier to see.

The simplest usage of the script is:

Which will plot the first band of each image. To change the bands used, labels for the plot and scaling additional flags can be passed in. 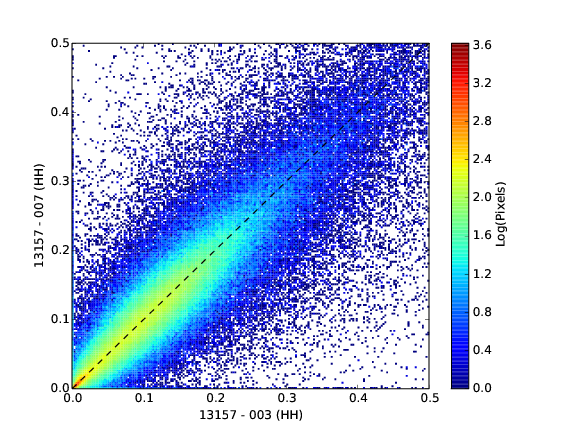 The script assumes both images are the same projection and resolution, and RIOS takes care of the spatial information. It would be possible to adapt so RIOS resamples the data, see the RIOS Wiki for more details.